Workflow – Useful REST calls – Get users in a group

From within a workflow you may want to get a listing of users within a specific group. This requires the use of a REST call which builds a dictionary of users within the group and then loops through them one by one

Define the REST call in a string

[%Workflow Context:Current Site URL%]_api/web/sitegroups/GetByName(‘UserGroupName’)/usersWhere UserGroupName is the name of the group that you wish to get the users from (Note the quotation marks are important)

Build a dictionary to define the return format

Next, insert a ‘Build Dictionary’ action. Initially, it appears as follows:

Click on ‘this’ and use the ‘Add …’ button to define the dictionary names ‘Accept’ and ‘Content‑Type’ as follows:

Both of these items have exactly the same value ‘application/json;odata=verbose’

Instead of using the defaulted name of ‘dictionary’ in the ‘Output to’ command, I use my own name of ‘Header’. This change of name is optional. At any rate, after the dictionary changes have been made, the command looks similar to the following:

In the next line, insert a ‘Call HTTP Web Service’ action. This will place something similar to the following in your workflow: 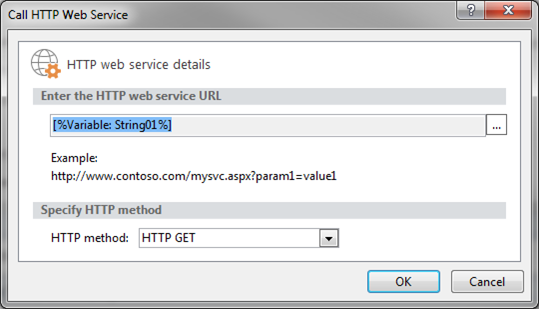 Set the HTTP Call to use the Header dictionary that you defined earlier (the one with the ‘Accept’ and ‘Content‑Type’ values). Right mouse click on the call, and select the ‘Properties …’ option as shown below. Set the ‘RequestHeaders’ to the Workflow variable ‘Header’

Get the number of items (users) returned by the call

The previous statement makes a call to the SharePoint site and returns information into the dictionary we defined. We now need to interrogate the dictionary to get the results of the call. This is done with a ‘Get an item from a dictionary’ action

Click on the ‘item by name or path’ and type ‘d/results’ in the fill-in. Then click on ‘dictionary’ and select the ‘ResponseContent to’ variable’ Response’ and Output the result to a dictionary variable called DataSet. At the end of these changes, your statement should look as follows:

You then should count the number or items (users) that have been returned and place the result in a workflow variable. This is done using a ‘Count Items in a dictionary’ action as shown below:

Prepare the initial values to loop through the list of users

Since I intend to loop through all the items in the dictionary, and write data to a variable, I need to prepare the initial values. This is done by setting ‘Count’ to 0 and ‘String02’ to an empty string. I also write to the log file to indicate how many items have been returned and the ‘ResponseCode’ of the call in case there are problems

Loop through the users returned by the REST call

The next group of statements loops through the returned values and writes the ID of the user name to a variable (I write the value of the ‘LoginName’ to a variable update the Current Item as shown below). These values (LoginName, Id) are a couple of the properties that are returned by the HTTP GET, but there are others that can be used, such as ‘Email’. For a comprehensive listing of fields available, visit https://msdn.microsoft.com/en-us/library/office/dn531432.aspx

The key part of this step is the second last statement which concatenates all the user ID’s into a single workflow variable, ‘String02’. A word of caution here: Designer Workflows have a limit of 255 characters, and if your code attempts to write a larger value to a string, the workflow will suspend. If this happens, two of the options available for addressing the problem are:

Write the data to a multi-line text field instead. I sometimes include such a field in a temporary table and use an ‘Update List Item’ action to update the list. Then, in an InfoPath form, you can validate against this data. In the example above, because I expect that the values of the User Account ID’s will exceed 255 characters, I do exactly this in the ‘then Update item in Current Item’ statement which writes the following value to TempMultiLine : [%CurrentItem:TempMultiLine%];[%Variable: String01%]

Write the data to a Multiple Value People Picker field. This means that you will have to prepare a valid People Picker format in each iteration and write it to the field


Once the loop is finished, I have all the ID’s of the users in the group in the workflow variable ‘String02’. I then prepare this data in a format the SharePoint Person/Group field will accept. The next few statements will refer to the following figure (do not expect the string containing the number of users in this particular group to be greater than 255 characters)

If the string is not empty, I set the initial part of the update string ‘String01’ to the following:

I now concatenate the prefix (String01) and suffix (String02) to formulate the final update string, reusing ‘String02’ as the workflow variable that contains this value

In the last ‘Update item in Current Item statement, I write the string to a Person/Group string in my current item (Please pardon the field name) 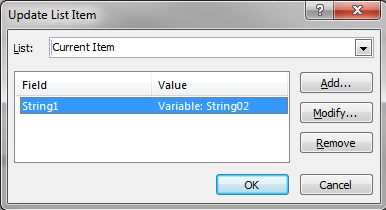